Russia to ban imports of chilled meat from Germany

From February 4th, Russia's Agency for Sanitary Control, Rosselkhoznadzor, will ban the imports of chilled meat from Germany. This decision has been made due to the failure to execute Russian veterinary and sanitary requirements. 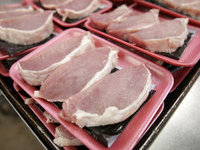 According to the agency's press secretary Alexei Alexeyenko, Russia is constantly insisting on guarantees from Germany to execute Russian veterinary and sanitary requirements. However, the German veterinary agency refers to difficulties of the federal system.

As a result, Rosselkhoznadzor officially informed the head of the German veterinary service, Karin Schwabenbauer, on the decision to ban the imports of chilled meat products on the territory of Russia. The ban embraces chilled beef, pork and poultry. The head of Rosselkhoznadzor, Sergei Dankvert, does not rule out that such measures can be taken against the imports of chilled meat from the United States and Canada.

Furthermore, Rosselkhoznadzor also considers an opportunity of limiting the supplies of dairy products from Germany. According to official spokespeople for the agency, an adequate decision can be made within a week.