The ownership of Moscow's renown Metropol Hotel was acquired by Azimut Hotels chain of Alexander Klyachin, Forbes reports. The businessman takes the eighth place on "Real Estate Kings" list of the magazine. 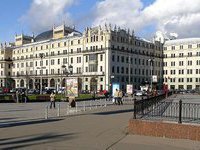 According to Eugene Ustenko, the general director of joint venture Metropol, which rents Metropol Hotel before 2017, they do not plan either renovation of reconstruction works for the hotel in the near future. "We confirm that the hotel will remain the best hotel in Moscow," he said.

Metropol has the status of a cultural heritage object; it is a historical and architectural monument. The hotel was built on the initiative of philanthropist Savva Mamontov in 1901. Among other things, Metropol is famous for its unique collection of paintings.

The last reconstruction and restoration of the hotel was conducted in 1991. The same year, Metropol became a five-star hotel. The hotel has 362 rooms, including 72 suites, 10 conference halls and two restaurants.