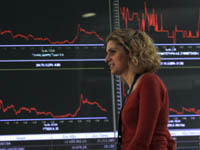 Investors are likely to buy shares even on small news because stocks have been sold too much globally on lingering debt issues in European countries," said Seiichiro Iwamoto, who helps oversee about $35 billion in Tokyo at Mizuho Asset Management Co. "People in the market are swinging between joy and sorrow on even the smallest news from the region." Futures on the Standard & Poor's 500 Index rose 0.7 percent after swinging between gains and losses today. The U.S. equity benchmark yesterday climbed 2.9 percent, the most since Oct. 27.
Fitch Ratings lowered its outlook on the U.S. to negative following a congressional committee's failure to agree on deficit cuts, informs San Francisco Chronicle.