Americans brace for busiest shopping day of the year 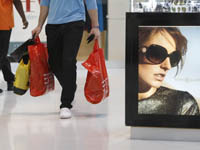 You might want to take a nap after eating that second piece of pumpkin pie on Thanksgiving Day. You'll need to conserve your energy -- especially if Black Friday shopping is part of your plans. The hunt for the best deals on this traditional kickoff to the holiday shopping season is no longer as simple as rising before dawn and heading to the stores.
A race among retailers to coax money from the pockets of eager shoppers has many stores opening even earlier, rewriting the rules for what's typically one of the busiest shopping days of the year.
The tradition of stores opening to long lines at 5 or 6 a.m. suddenly seems quaint, like a distant memory from 2007. A number of local retailers -- including Kmart, which opens at 5 a.m., and Erie Sport Store, which opens at 6 a.m. -- will continue to welcome shoppers in the predawn darkness usually reserved for doughnut makers and early-to-rise dairy farmers, says GoErie.com.

The extended celebration goes in the other direction as well: online retail giant Amazon launched its Black Friday page at the start of November. Officially dubbed "Countdown to Black Friday Deals Week," among its sale offerings are so-called "Lightning Deals," offering deep discounts within a set period spanning a few hours. For example, the XtremeMac Tango TRX 2.1 Bluetooth High-Fidelity Audio System, which retails for $180, went for $85 during one of these flash sales. As of November 11, it was still heavily discounted at $95.24. In addition, more online retailers are participating in Cyber Monday this year, three days after Black Friday.
Beyond sales on or around Black Friday, the rise of deal-a-day sites, group-buying coupons, discount retailers, and online codes has created more discount deals 365 days a year. So instead of joining the long lines or sleep-deprived crowds on Black Friday, here's how to take advantage of the sales that happen all year round, according to The Fiscal Times.

Amazon.com dominated retail traffic last year, growing 25 percent in unique visitors over the prior year, comScore said. Brim said the early release of many Black Friday ads, especially Walmart's, will help Amazon, which is known for aggressively moving prices to meet or beat competitors.
Be sure to check for "secret" deals advertised only online or social media sites like Facebook early next week, de Grandpre said. Walmart and Best Buy, for example, have advertised last-minute deals online, even if they are available in stores, he said, reports Fort Worth Star Telegram.

To lure more shoppers, retailers are rolling out new marketing strategies, says Larry Woodard, chair of the American Association of Advertising Agencies' New York Council. Consumers who've provided their cell phone numbers to stores in the past can expect text messages touting Black Friday deals. Social media advertising is also on the rise. Macy's, for example, has been announcing Black Friday deals on Facebook each week since Oct. 31, including 50% off Sharper Image iPhone/iPod docking stations and 40% discounts on coffee makers and espresso machines, informs Smartmoney.com.