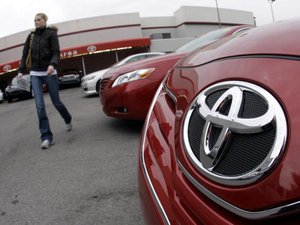 Toyota today announced its all-new Camry, the mid-size sedan that has been the auto company's bread and butter for decades.

The Camry has been America's best-selling car for 13 of the past 14 years. If ever there were a sedan that could be called the world's car, it's the Camry. Since its introduction in 1983, Toyota has sold 15 million of them. It's as popular as a taxi fleet vehicle in the Middle East and North Africa as it is with families throughout the Americas and even car-snobbish Europe, according to International Business Times.

So important is the new Camry to Toyota's recovery that the company's president, Akio Toyoda, traveled to Kentucky so he could drive the first completed car off the assembly line and proclaim "100 percent confidence" in the work of his designers and engineers.

Sales of the company's flagship Toyota brand in the U.S. have fallen almost 6% this year through July, a period during which auto sales overall have climbed almost 11% from a year earlier, according to Autodata Corp. The brand's market share has fallen to 11.4% from 13.4%, the biggest drop of any major nameplate. And that follows a big dip in 2010.

Until recently, Toyota and Honda, the two biggest Japanese brands in America, were considered the default choices for sedan buyers. But that's changed as U.S. automakers restructured their businesses and put a renewed emphasis on designing fuel-efficient passenger cars, says Los Angeles Times.