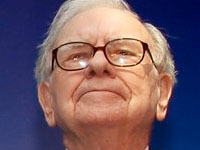 Warren Buffett, who is urging fellow billionaires to commit most of their wealth to charity, gave away stock valued at about $1.5 billion in his annual gift to the foundation established by Bill Gates.

The donation of 19.3 million Berkshire Hathaway Inc. Class B shares was made Thursday, according to a filing. The shares closed at $77.77 on the New York Stock Exchange, according to information from San Francisco Chronicle.

It was in 2006 that Buffett pledged the majority of his holdings to the trust established by Bill Gates, along with other charities. In a letter to Gates, Buffett then noted that he would donate five percent fewer shares each July in comparison to the previous year.

Since then, he has donated a total of 132.45 million Berkshire Class B shares to the trust, worth $10.3 billion at yesterday's closing price.

In a different filing, Gates reported that the foundation currently holds 100.98 million shares of Berkshire Class B shares, which is worth $7.9 billion. During the past sixty days, the Trust sold 2.6 million Class B Shares, informs RTT News.

Buffett, 80, annually donates smaller sums at about the same time of year to four family charities. These include the Susan Thompson Buffett Foundation, named for Buffett's late first wife, and foundations for their children Howard, Peter and Susan.

Berkshire was not able to immediately provide further information about these donations, which are typically disclosed in SEC filings. Buffett is the world's third-richest person, with a $50 billion net worth, Forbes magazine said in March.

The Gates Foundation said it employs 927 people, spent $2.6 billion last year, and has a $37.1 billion endowment. Buffett expects the foundation to spend his gifts, which have totaled roughly $9.5 billion. The number of shares that Buffett donates declines by 5 percent each year, says Reuters.