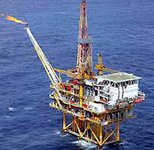 Oil traded near its lowest in two weeks on signs prices are damaging fuel demand and that political tension in Middle East may abate.

Oil dropped as much as 0.6 percent in London as Libyan rebels said they would accept Turkey's proposal if it includes an agreement for leader Muammar Qaddafi to relinquish power.

At the New York Mercantile Exchange, Light sweet crude contract for May delivery shed 3.13% or $3.45 to reach at $106.25 per barrel, lowest settlement of oil since March 30.

London Brent crude felt the pressure also and dipped greater than 2.00%, to trade at $120.92 per barrel. The oil's biggest intraday slump in a month and it tracked a drop of 2.50% on Monday. Since Friday prices for the crude had fallen 5.80%.

The director at BNP Paribas Commodities in New York, Tom Bentz, told that analysts at the firm were ranked oil as overvalued, which technically needed to be corrected and the process had instigated, reports.