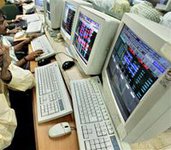 Futures advanced as much as 2.3 percent in New York after Muammar Qaddafi vowed to repel attacks by missiles and warplanes against military installations. Libya's crude output has fallen to a quarter of pre-crisis production levels may stop entirely, according to the chairman of the national oil company.

Bahrain Petroleum Co. employees went on strike last week in response to a police crackdown on anti-government demonstrations, while Yemen declared a state of emergency, according to Bloomberg.

The price of oil jumped by more than $2 a barrel on Monday morning, driven higher by the military action in Libya and strong demand from Japan.

As Operation Odyssey Dawn continued in the Middle East, the cost of a barrel of Brent crude gained $2.29 to $116.22. US crude rose by the same amount, to $103.35. Analysts have predicted that the strikes against Colonel Gaddafi could push oil above its recent highs, with Brent tipped to rise above $120 a barrel, The Guardian reports.