Nissan Motors to restart production in Japan this week 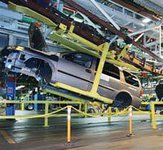 Nissan Motor said on Sunday that it planned to restart production this week at five of its six Japanese plants that have been idled since an earthquake and tsunami pummeled the country on March 11. The announcement was among a handful of encouraging signs for Japan's economy, the world's third largest, which has been staggered by the natural disasters and the subsequent crisis the Fukushima Daiichi Nuclear Power Station.

Honda and Toyota have said that they are ramping up production at factories across Japan, moves likely to ease the shortages of parts and supplies that have disrupted automakers worldwide, according to New York Times.

Sony plans to restart a factory that makes rechargeable batteries in Tochigi prefecture, northern Japan, from March 22, Hiroshi Okubo, a Tokyo-based spokesman, said yesterday. Nissan, Japan's second-largest automaker, said in a statement it will begin the resumption of operations at six factories tomorrow and some vehicle assembly from March 24.

Scores of Japanese companies have been forced to halt some operations after the March 11 earthquake and ensuing tsunami that claimed more than 8,600 lives. Manufacturers are also facing power outages, disruptions in the supply chain and a strong yen that's undermining the competitiveness of exports, Bloomberg says.