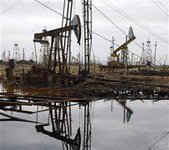 Prices advanced as much as 1.5 percent as riot police cleared anti-government protesters from a central square in Bahrain's capital. The country declared a state of emergency yesterday as Saudi-led military intervention failed to end demonstrations. Oil dropped 1 percent earlier today as Japan battled to prevent a nuclear meltdown that threatens to worsen damage to the economy from last week's earthquake.

"Had it not been for the disaster in Japan, with the Saudi troops moving into Bahrain the oil price should have moved toward $120," said Victor Shum, a senior principal at energy consultants Purvin & Gertz Inc. in Singapore. "The contagion effect on oil prices is still present," according to Bloomberg.

North Sea Brent crude closed at 113.67 dollars a barrel in London on Monday, down 1.76 dollars from last Thursday. And in after-hours trading Tuesday, it fell to the 108-dollar level as share prices also fell, following a fire at the Fukushima Daiichi nuclear plant's No. 4 reactor operated by Tokyo Electric Power Co.

Crude oil processing volumes in Japan are expected to fall for the time being in the wake of quake-triggered fires at refineries in Miyagi and Chiba prefectures.

The oil market "is facing selling on the view that economic activity in Japan will stall for the short-term" amid rolling blackouts in areas served by Tokyo Electric, says Tomomichi Akuta at Mitsubishi UFJ Research and Consulting Co.

But with the Fukushima nuclear plant out of commission, demand for oil by fossil fuel plants is set to rise, NIKKEI.com reports.

On Tuesday, crude delivery for April in the US fell to $97.18 per barrel, a $4.01 drop, or nearly 4%. The plunge of oil prices came as a 3rd fire broke out at the Fukushima Dai-ichi nuclear plant in Japan.

The prime minister says that the radiation that has leaked from the 4 reactors isn't enough to impact health, but the risk of further leaks is very likely. However, oil prices have dived over 5% since the disaster hit, and of course oil traders are surprised, Moo News reports.