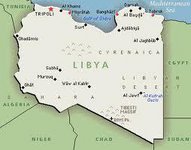 The European Union Friday froze the assets of five Libyan entities, including the central bank and the country's sovereign-wealth fund,in a further push against the Libyan leader Col. Moammar Gadhafi, according to its Official Journal.

An EU spokesperson said: "The funds and economic resources of the five designated entities will be frozen and an additional name will be added to the list of 26 individuals deemed responsible for the violent crackdown on the civilian population since 15 February and subject to an asset freeze." The sanctions will be effective from Friday.

In a related development, Muammar Gaddafi's son claimed that victory would not be distant dream for Libyan loyalist forces after they regained control on two key towns. "Victory is in sight. Victory is near," Seif al-Islam told the exuberant youths. "I swear before God that we're going to win," he said just hours after the EU and NATO leaders started two-day crisis talks over a possible no-fly zone over Libya, All Headline News informs.