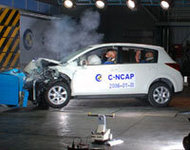 The Insurance Institute for Highway Safety has released its list of the 2011 cars earning the top safety picks.

Test were based on how cars handle front, side and rear-end crashes, as well as a rollover. The big winners this year are Hyundai, Kia, Volkswagoen and Audi, according to CBS 5.

The Insurance Institute for Highway Safety recognized 66 vehicles on Wednesday with its "top safety pick award" for the 2011 model year, the most-ever awarded by the Virginia-based group. The number was more than double the 27 vehicles selected last year.

Hyundai Motor Corp. and its affiliate Kia Motors Corp., and Volkswagen AG and its Audi brand received the most awards with nine, followed by eight awards apiece by General Motors Co., Ford Motor Co. and Toyota Motor Corp. The awards, used in advertising to attract car buyers, bolster Hyundai and Volkswagen as they attempt to build a larger foothold in the United States.

Hyundai's Genesis sedan, Sonata midsize and Santa Fe and Tucson sport utility vehicles picked up awards, while Kia was recognized for the Optima midsize car, the Forte and Soul small cars, and the Sorento and Sportage SUVs.

Volkswagen won plaudits for the Jetta and Jetta SportWagen, the Golf and GTI small cars and the Touareg and Tiguan SUVs. Audi's A3 and A4 sedans and Q5 SUV also made the list, The Associated Press reports.