Finance Ministers of G20 Nations To Meet in South Korea 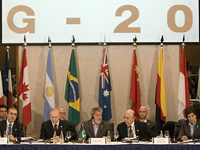 Finance Ministers of G20 Nations To Meet in South Korea

Finance ministers and central bankers from the G20 nations are expected to endorse European plans to stem the eurozone debt crisis as they meet in Busan, South Korea this weekend.

They will also discuss the need for common standards across financial markets, including a global bank tax, BBC News says.

"The G-20 needs the rest of the developing world for reasons of self-interest," Ngozi Okonjo-Iweala, a World Bank managing director said at a conference on the sidelines of the G-20 meeting.

"G20 countries need new sources of demand. The developing world has the potential, and it has the people," she said. "The G20 must recognize this and give development the central place it deserves in its agenda," she said, The Associated Press reports.