The financial cost of tackling the oil spill in the Gulf of Mexico, the worst in U.S. history, now stands at $990 million, BP (BP.L) said on Tuesday as it prepared for a new attempt to control the flow of oil this week. 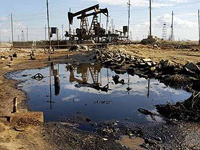 London-based BP will try to place a containment cap on top of a lower marine riser package (LMRP) later this week after two previous attempts to plug or contain the well failed, Reuters says.

``Well, the relief well at the end of August is certainly the end _ the end point on this game,'' Robert Dudley, BP's managing director, said Sunday on ABC television's ``This Week.'' ``But we failed to wrestle the beast to the ground yesterday.''

That means the relief well won't be completed until the middle of the Atlantic hurricane season, which begins Tuesday. The crude likely won't affect the formation of storms, but the cyclones could push the oil deeper into coastal marshes and estuaries and turn the oil into a crashing black surf, Economic Times reports.