David Cameron, Britain's new prime minister, said Thursday his government will support the eurozone's efforts to control its debt crisis, but that he's glad his country uses the pound, not the euro, as its currency. 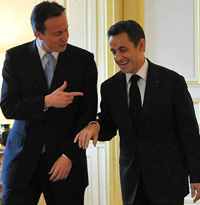 On his first overseas trip since being elected, Cameron met French President Nicolas Sarkozy for a working dinner at the Elysee Palace in Paris. On Friday, Cameron travels to Germany for talks with Chancellor Angela Merkel, The Associated Press reports.

Sarkozy stood up for the currency. "I'm among those who believe that, united, one is stronger than isolated," he said. "It's a political choice." He called the euro a success, noting that "in a little time, it has become the world's second currency."

Cameron called for the European Union to address its budget deficits. "This is not an alternative to economic growth; we think it's an important part of getting that economic growth," he said. "The greatest risk, I believe, to our economies is inaction on our deficits.", CNN informs.