The American economy added an unexpectedly strong 290,000 jobs in April, while the unemployment rate rose to 9.9 percent, the government said Friday. Analysts had expected a gain of about 190,000 in the month. 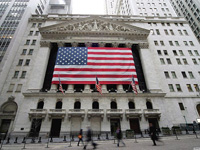 “This is unambiguously a strong report for growth implications,” James O’Sullivan, chief economist at MF Global, said. “It adds to the evidence that the pick-up in growth is leading to a clear cut pick up in employment. It is very clear there has been a bounce here, and momentum has been up.”, New York Times reports.

Companies such as General Electric Co. are boosting staff as sales improve, leading to income gains that may spur consumer spending and more hiring. At the same time, unemployment may take time to recede as Americans who had dropped out of the workforce resume the job hunt, one reason why the Federal Reserve says it will keep interest rates low.

“Employers are hiring again because they’re seeing higher sales and better profit,” said Stuart Hoffman, chief economist at PNC Financial Services Group Inc. in Pittsburgh, who had forecast a 300,000 gain in payrolls. “The unemployment rate is up as discouraged workers are returning to the job market to look for employment.”, BusinessWeek informs.