Coca-Cola’s profit in I quarter has increased by 19% 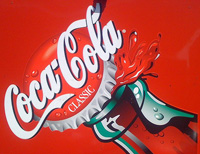 Coca-Cola’s profit in I quarter has increased by 19%

The results were weaker than analyst expectations. The company earned $1.61 billion, or 69 cents per share, in the quarter ending April 2. That's up from earnings of $1.35 billion, or 58 cents a share, in the same period last year. Revenue rose 5 percent to $7.53 billion, The Associated Press reports.

“During the quarter we continued to achieve solid business results worldwide, all while taking decisive action to strategically advance our North America business and further strengthen our franchise system in Europe,” CEO Muhtar Kent said in a statement. “Despite expected ongoing challenges in global economic conditions, we continue to invest in our business and build the health of our brands fueled by world-class marketing and innovation.”

Coca-Cola said its worldwide unit case volume grew 3% last quarter, but volumes in North America slumped 2%. Emerging markets continued to show strength as volumes rose by 6% in China and 11% in the company’s Eurasia and Africa group. The company said its integration planning for its acquisition of Coca-Cola Enterprises (CCE: 28.19, 0.02, 0.07%) remains on track, FOXBusiness informs.