Gold Weakens on Speculation of Increasing Demand for Dollar

Gold weakened, after slumping Friday by the most since Feb. 4, on speculation that a fraud suit by U.S. regulators against Goldman Sachs Group Inc. will increase demand for the dollar as a safe investment. 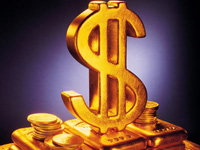 Gold Weakens on Speculation of Increasing Demand for Dollar

Gold for immediate delivery fell as much as 0.4 percent to $1,132.4 an ounce before trading 0.2 percent weaker at $1,135 at 2:22 p.m. in Singapore. The metal tumbled 1.9 percent on April 16. The dollar strengthened 0.3 percent against a basket of six currencies as Goldman faces a probe in Britain and scrutiny from Germany after being sued for fraud, BusinessWeek informs.

Stocks dove and gold prices, along with share of gold producers, cratered as news hit the tape that the SEC charged Goldman with deceiving clients in connection with the sale of mortgage securities designed by hedge fund magnate, John Paulson. Paulson owns 8.4% of outstanding shares of the SPDR Gold Trust (GLD) in addition to a basket of gold mining stocks, including Kinross Gold (KGC), Anglogold Ashanti (AU), Gold Fields (GFI), and Novagold (NG).

Supplementing the gold holdings in his flagship macro fund, Mr. Paulson maintains exposure to the gold price through a gold-oriented investment vehicle launched in January of this year, in which he invested$250 million of his own personal capital. Concerns over potential redemptions stemming from Paulson’s connection to the SEC’s fraud charge against Goldman intensified the selling pressure on the gold price and the gold stocks . Neither Paulson nor his investment firm was implicated in any wrongdoing by the SEC, GoldAlert reports.