Honda to Recall 412000 Vehicles in US for Brake Problem 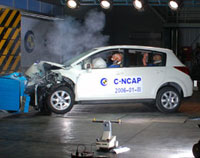 Honda to Recall 412000 Vehicles in US for Brake Problem

A part called a vehicle stability assist modulator should be modified on 344,000 Odysseys and 68,000 Elements from the 2007-2008 model years, Tokyo-based Honda said today in a statement. Honda is looking into at least three reported crashes in which brakes were cited, said spokesman Chris Martin, according to a report in BusinessWeek.

The Wall Street Journal reported that, the announcement comes as Japanese rival Toyota Motor Corp. aims to restore its reputation after its global recall of about 8.5 million vehicles to fix sudden-acceleration and other problems, which led to congressional scrutiny in the U.S. and falling sales in recent months.

Honda is recalling the vehicles to modify their vehicle-stability-assist modulators, some of which were assembled in a way that could allow air to enter the modulator. Over months or years that could result in such "soft" or "low brake pedal" issues.

The company says the problem happens because a part in the stability control system can let a small amount of air into the braking system.

Honda says owners should take their vehicles to a dealer as soon as they get notification from Honda. Letters will go out at the end of April, The Associated Press reported.