Eurostar Should Do Corrections of Winter Mistakes

A probe Friday strongly criticised cross-Channel train operator Eurostar for failing to prepare its trains to cope with winter weather which led to breakdowns and mass disruption in December. 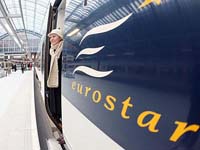 Eurostar Should Do Corrections of Winter Mistakes

Eurostar also had "no plan in place" to deal with the chaos created when five trains broke down in the Channel Tunnel with more than 2,000 passengers aboard in the busy pre-Christmas period, the investigation said.

The maintenance of the trains came in for particular criticism -- one of the broken-down trains had no snow screens on its power cars which allowed a fine form of snow to cause the electrical systems to fail.

Passengers stuck on the trains endured overflowing toilets and darkness and stuffy conditions for hours on end, the report said, adding that "provision of information to customers was inadequate."

"The Review... found that Eurostar trains had not undergone sufficient winter weather preparations to withstand these conditions and that maintenance procedures should be revised," it read.

"This was the first time this had happened in 15 years of operation," the review said.

While the evacuations of trains inside the Tunnel under the English Channel was carried out "safely and efficiently", the report highlighted "concerns" about conditions in the trains after they lost air conditioning and lighting.

It also said communication between Eurostar and Tunnel operator Eurotunnel needs to be radically improved.

Garnett and Gressier made three main recommendations -- which Eurostar has already indicated it will accept.

"First, passengers need to be assured that the Eurostar trains are reliable and so improvements need to be made in this area as a priority," they said.

"Second, if a train breaks down and passengers have to be rescued or evacuated, this must be done with greater speed and consideration, and more comprehensive emergency plans should be put in place.

"Third, in an emergency, passengers need to have prompt information and regular updates. Eurostar must improve the way it communicates with passengers and put in place new systems and practices to achieve that."