German industrial orders fell sharply in December, according to preliminary data on Thursday, caused by a global crisis influencing foreign demand for goods made in Germany, Europe's top economy. 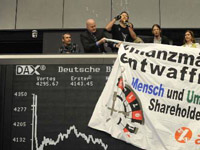 Orders were down 2.3 percent compared to November, the data from the economy ministry indicated, disappointing analysts surveyed by Dow Jones Newswires who had expected a slight rise.

There was a hefty decline in foreign orders, down 3.2 percent, with domestic demand falling 1.4 percent.

"The drop in demand was broad-based and hit almost all economic sectors," the economy ministry said in a statement.

However, it continued to be optimistic for the future, pointing to positive business confidence data that "support the picture of a continuing recovery in the industrial economy.

Germany is battling to recover from its worst slump since World War II, with gross domestic product declining by five percent in 2009.

With consumption and exports gradually recovering, the government has forecast growth of 1.4 percent this year.