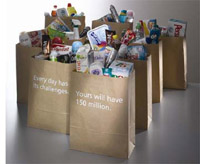 Chief Executive Paul Polman's policy to spend more on marketing and to cut prices drove a third successive quarter of sales volume growth at the world's third-biggest food and consumer goods group. But prices were cut more than forecast stoking fears over competition.

Polman warned that competitors are increasing their activities in many markets trying to regain share on the back of more brand support and innovation. More pressure will come from increased taxes and the reduction in stimulus packages, he added.

"We expect the environment for our business in 2010 to continue to be tough.... Unemployment will continue to stay high and consumer confidence is likely to remain low," Polman told investors at a presentation after the annual results.

Analysts were concerned about pressure from key rivals such as Procter & Gamble. Unilever had to cut it prices by 3.1 percent in the fourth quarter, deeper than analysts had forecast, to match its rivals.

Anglo-Dutch Unilever said fourth-quarter underlying sales rose 1.8 percent compared with a consensus forecast of 1.4 percent, while 2009 saw a rise of 3.5 percent against a consensus of 3.4 percent.

The maker of Hellmann's mayonnaise, Omo detergent and Sunsilk shampoo saw underlying volume growth of 2.3 percent in 2009 which reached 5 percent in the fourth quarter with this seen across most key categories and countries as it cut prices to reflect the fall in commodity price like edible oils and tea.

But West Europe was Unilever's one region to show annual sales and volumes down as challenging conditions continued in Southern Europe and the weakness of the pound and increases in marketing saw regional profit margins slip.

The results come after U.S. rivals Procter & Gamble and Colgate-Palmolive reported strong growth in the final quarter of 2009, and European rival Henkel posted a strong close of 2009 due to cost cutting.

The group is moving to quarterly dividend and will make a payment for fourth quarter of 0.1950 euros per Dutch listed Unilever NV share and 17.04 pence for its London Plc shares.

Unilever's European rivals Danone <DANO.PA> and Nestle are set to report results over the next two weeks.