GM to Stake on Electric Motors

General Motors Co. will design and develop its own electric motors to power its hybrid vehicles as it is not going to lose grounds in development on modern lines. 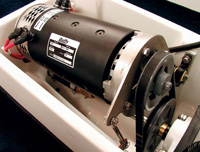 GM to Stake on Electric Motors

The motors will be developed at a U.S. plant creating about 100 jobs and debut in a 2013 hybrid sport-utility vehicle.

GM refused to disclose the plant's location and its potential volume. However, a person familiar with the situation said the auto maker's transmission plant in White Marsh, Md. is one of the top candidates. The motors will at first be used to power larger vehicles, although the aim is to shrink the size for use in cars.

Ford Motor Co. (F) in December announced plans to start producing its own battery systems for its next generation of hybrid and plug-in electric vehicles. Most of that development had been handled by supplier Delphi Corp.

"Most of the talk has been around batteries but without motor design you can't move forward in electrification," said Tom Stephens, GM's Vice Chairman of Global Operations.

Funding for the project will come from the $105 million U.S. Department of Energy grant GM received in August to develop electric motors and drive components.