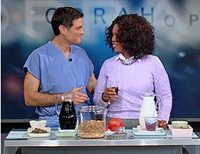 Weight Watchers, based in New York, says in the suit that Jenny Craig is running ads that refer to a study comparing Weight Watchers current weight-loss program and Jenny Craig's pre-packaged meals system.

But Weight Watchers says no such study has been done and the claims in the ads are not supported by fact or science.

The lawsuit has been filed in the U.S. District Court in New York City. It asks for an injunction and damages along with a ban of the ads.

Weight Watchers is an international company that offers various dieting products and services to assist weight loss and maintenance. Founded in 1963 by Brooklyn homemaker Jean Nidetch, it now operates in about 30 countries around the world.

Jenny Craig, Inc. is a weight loss, weight management, and nutrition company founded by Jenny Craig and Sidney Craig now headquartered in Carlsbad, California. The company operates more than 600 weight loss centres primarily in the United States, but also in Canada, Australia, Puerto Rico, and New Zealand. The program combines individual weight management counseling with a menu of foods which are distributed through its centers or shipped directly to clients.