Unemployment in Europe is a Highly Pressing Issue

Europe’s unemployment rate unexpectedly increased to the highest in more than 11 years in November as companies cut costs in the wake of the worst recession in more than six decades. 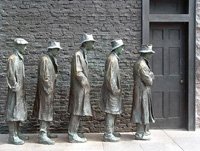 Unemployment in Europe is a Highly Pressing Issue

Unemployment in the euro area rose to 10 percent from a revised 9.9 percent in October, the European Union statistics office in Luxembourg said today. That’s the highest since August 1998. Economists forecast a November rate of 9.9 percent after the 9.8 percent initially reported for October, a survey showed. The euro-area economy expanded 0.4 percent in the third quarter from the previous three months, according to a separate report.

European companies are cutting jobs and paring wages to shore up earnings battered by the global slump.

“We’ll probably see further gains in unemployment over the coming months, with the jobless rate peaking at 10.7 percent in the second half,” said Juergen Michels, chief euro-region economist at Citigroup Inc. in London. “That’s obviously bad news to consumers, which will be hurt by job cuts, lower wage growth and rising energy costs.”

The euro-area economy returned to growth in the third quarter after governments spent billions of euros on stimulus programs to bolster spending. Still, corporate investment fell 0.8 percent in the quarter and consumer spending dropped 0.1 percent, today’s data showed. The European Central Bank last month kept borrowing costs at a record low and said it will exit some unconventional measures as the recovery progresses.

With a 94 percent surge in oil prices over the past year threatening to crimp earnings and the euro’s 5.2 percent ascent against the dollar over the same period making exports less competitive, companies may remain reluctant to add workers. European industrial orders dropped more than economists forecast in October from the previous month.

Siemens AG, Europe’s largest engineering company, last month posted its first quarterly loss in a year and forecast a drop in 2010 earnings. The Munich-based company cut its global workforce by 3.6 percent in 2009 to weather a slump in orders.

With the euro-area jobless rate forecast by the EU to reach 10.7 percent this year, consumers may keep a rein on spending. European retail sales posted the biggest drop in 13 months in November, the statistics office said yesterday.

BusinessWeek has contributed to the report.