The Monday was marked with the new economic period for Dubai, according to the hopes of Sheik Mohammed bin Rashid al Maktoum. 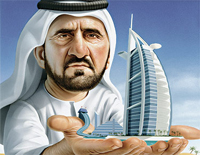 The city-state's 60-year-old hereditary leader, expects the building of the world's tallest skyscraper and its surrounding $20 billion development will help enhance his reputation among international investors and restore Dubai's allure as a business hub.

Sheikh Mohamed said that the tower, until now known as the Burj Dubai, will be renamed Burj Khalifa Bin Zayed after the president of the United Arab Emirates.

A multimedia presentation witnessed by thousands of onlookers at the base of the tower said the building was 828 meters, or 2717 feet, tall.

"Crises come and go," said Mohamed Alabbar, chairman of developer Emaar Properties, at a media event ahead of the opening of Burj Dubai Monday evening. "We must have hope and optimism and we must move on. I hope that this is the beginning of the gradual move forward."

Leading analysts expect the project will boost Emaar's revenue by almost $1 billion in the first quarter as homes and offices in the skyscraper are delivered.