Kindles are starting to take off, after years of anemic sales. For the first time ever, Christmas Day shoppers on Amazon.com bought more books for their Kindles than they did regular books. 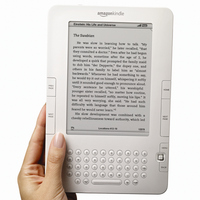 Obviously, this was an unusual situation -- Christmas Day isn't typically a big day for shopping, but virtually everyone who received a new Kindle e-book reader as a gift that day needed to download at least one book to try out their new device.

The e-book has been around for years, but until recently there were questions about whether it would ever become a main-stream product. That changed with the success of the Amazon Kindle, which allows users to wirelessly purchase books from almost everywhere, and then read them on a device with a good screen and long battery life.

This retailer says the Kindle is "the most gifted item in Amazon's history," Brighthand reports.

Meanwhile, if it wasn’t already obvious, further proof emerged that we are increasingly living in a digital world. Amazon.com announced that on Christmas Day customers purchased more Kindle books, Amazon’s wireless reading device, than physical books. That has never happened before. Kindle also became the most gifted item in Amazon’s history, according to the announcement.

In this “Chart of the Week” we look at the top-three most purchased products on Amazon by category from November 15 through December 19. Amazon did not release the number of units sold for each product, nor did it release unit-sales for the Kindle or Kindle books purchased, Practical Ecommerce reports.

That wasn't the case when e-books first appeared a decade ago. But Amazon has made a point of selling its Kindle titles at a discount to physical editions, even if it means losing money.

And then there are the titles that Kindle owners really, really love--the ones they get for nothing. As the Washington Post noted earlier this week, the list of best-selling Kindle titles is dominated by free books:

Amazon's customers have made it clear that $9.99 is still too high for their taste. Most titles in the company's list of top 100 Kindle bestsellers are priced below $9.99, and the most popular price point is $0.00.

The good folks at MediaBistro have gone ahead and counted, so you don't have to. As of a day ago, 64 of Amazon's top 100 Kindle titles cost nada, CNET News reports.