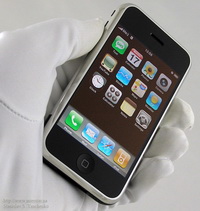 People who entered a New York zip code over the Christmas weekend while trying to buy an iPhone from AT&T received a message saying the device wasn't available in their area. The device, however, was still available to New Yorkers through Apple or AT&T stores.

On Monday, New Yorkers could once again by an iPhone online through AT&T, the Wall Street Journal reported. AT&T is the exclusive U.S. wireless provider for the iPhone.

AT&T declined a request for an interview from InformationWeek, but a spokesman said in an e-mailed statement, "We periodically modify our promotions and distribution channels." No reason was given for the recent change.

The Consumerist, a Web site published in partnership with Consumer Reports, was the first to report that AT&T had stopped selling iPhones online to New Yorkers. The report led to speculation on the Web that AT&T was trying to reduce data congestion on its networks, InformationWeek reports.

One of the first explanations was that AT&T had taken the action to help prop-up its NYC data service, which is perpetually slammed by iPhone users.

The rumor was such a good idea that it's something AT&T should seriously consider. And not just in NYC.

Limiting sales might be the best thing AT&T could do to address the service mess iPhone data usage seems to have created. And if it works in New York, can San Francisco, that other hotbed of the AT&T customer rebellion, be far behind?

If AT&T cannot meet demand for data service in these two digital capitals, stopping additional sales seems like the only thing to do until network build-out and other technical changes can improve the situation, PC World reports.

Meanwhile, the plot thickened when an online customer service rep apparently told The Consumerist's sleuths the device was unavailable "because New York is not ready for the iPhone." Speculation soon started running rampant that the carrier was pulling the plug as part of a solution to its ongoing data overload, PC World reports.