The financial data of the end of the year seem encouraging for U.S. economy but things may change any time. 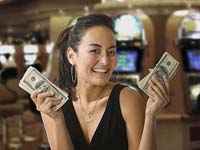 The dollar gained against most major currencies on Tuesday, hitting a two-month high versus the yen, as the U.S. economy continued to show signs of improvement and on year-end buying from asset managers.

Still traders and analysts warned against reading too much into intra-day movements because the thin holiday trade means that a few large trades can completely alter the direction.

U.S. data released on Tuesday, including a rise in U.S. consumer confidence in December to a three-month high, certainly helped the dollar's cause, analysts said.

"The assumption now is that if we continue to have positive news out of the U.S., the Fed could start its hiking cycle next year and that's dollar-positive. And when you have thin market conditions, it doesn't take much to move this market."

Some traders also attributed the dollar's gains to year-end buying by asset managers as they square off their positions, with flows going mostly into U.S. Treasuries.

The ICE Futures' dollar index, a non-traded gauge of the greenback's performance against six major currencies, rose 0.2 percent to 77.809 .DXY, not far from a 3-1/2-month high touched last week.

Traders said upward pressure on long-term Treasury yields has provided support to the dollar against the yen after U.S. government bonds traded lower on Monday and pushed the benchmark 10-year note yield to its highest level in nearly five months. [US/]

The correlation between dollar/yen and 10-year U.S. Treasury yields remained robust at 94 percent on Tuesday, according to Reuters data. U.S. Treasury yields have risen sharply this month and are likely to see a further increase this week given Treasury supply of around $118 billion in a thin market.

The dollar/yen relationship has recently become more sensitive to Treasury yields and interest rate expectations because the currency pair has lagged major crosses during this month's rally in the greenback when investors started to price in a stronger U.S. recovery.

Meanwhile, higher-yielding currencies such as the Australian dollar, up earlier in the session when improved risk appetite was the central trading theme, held on to gains but were off session peaks.

In early afternoon trading, the Australian dollar was up 1.0 percent against the U.S. dollar at US$0.8960 AUD=, after earlier touching a nearly two-week peak at US$0.8993.