General Motors Co is offering huge incentives to its dealers to speed up the sales of leftover inventory from its Saturn and Pontiac brands, that can push up the automaker's December sales. 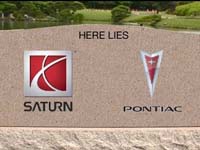 In a letter to its dealers, General Motors said it would pay $7,000 for every new Saturn or Pontiac on their lots that is moved to rental-vehicle or service-vehicle fleets, according to the reports.

With this plan, the vehicles would be classified as used cars since the dealers would be their first owner, which would later enable them to sell those cars at a steep discount.

GM is in the process of dropping its Pontiac and Saturn brands and selling Hummer in its restructuring.

Since September, a deal by GM to sell its Saturn brand has collapsed, an offer to sell its European unit Opel was pulled, the sale of Hummer to a Chinese firm has been delayed and Saab now faces closure.