Fannie Mae and Freddie Mac to Receive $6m from Government

Fannie Mae and Freddie Mac, the heads of US mortgage giants, may each get pay packages of up to $6m (£3.7m) for 2009, depending on company performance. 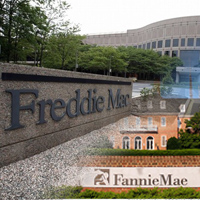 Fannie Mae and Freddie Mac to Receive m from Government

The government has put $111bn of public money into the companies since taking them over and the awards go against moves to curb lavish pay packages.

But the regulator which decided the pay levels said the awards were 40% lower than before the government bailout.

The sums involved reflected the need to attract and retain talent, it argued.

In another development, the Obama administration announced it was removing the $400bn financial cap it will provide to the two companies to keep them from failing, BBC News reports.

News agencies also report, that's a nice chunk of change for running two companies that together lost $72 billion in the first nine months of 2009 and have received $112 billion in Treasury aid.

But what's remarkable is that every penny Fannie and Freddie will pay out will be in cash - at a time when the White House is pressuring companies to pay more in stock, in the name of suppressing the bet-the-ranch mentality that helped pave the way for Wall Street's 2008 collapse.

But his message has been heard everywhere, notably on Wall Street, where some big banks that have repaid Treasury loans have set plans to offer more compensation in stock.

"It's amazing that the government is pushing companies with which it has no contractual standing to pay executives in stock, but isn't doing the same with companies that it actually controls," said Len Blum, a managing director at investment bank Westwood Capital in New York, CNNMoney.com reports.

Meanwhile, the top executives at other firms receiving bailouts, such as American International Group (AIG, Fortune 500) and General Motors, are receiving stock in their companies as part of their packages. Even some firms no longer under federal pay limits, such as investment bank Goldman Sachs (GS, Fortune 500), announced that all bonuses would be paid in stock rather than cash this year.

DeMarco pointed out that there is great uncertainty about whether the federal government will continue to operate the firms into the future. The could end up making Fannie and Freddie's current shares worthless.

"As this debate progresses, it will be essential that the enterprises continue to perform their current role," DeMarco said, CNNMoney.com reports.