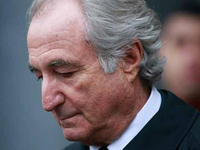 The injuries, the station reported, citing unidentified sources, were consistent with an assault.

Madoff, 71, was treated at Duke University hospital late last week, and was discharged earlier this week, the station reported.

But the hospital where Madoff was reportedly treated denied the report.

"There's been no patient at our hospital with that name," said Debbe Geiger, a Duke University Medical Center spokeswoman. She declined to comment further.

A Federal Bureau of Prisons spokeswoman declined to comment on the report and Madoff's lawyer was not immediately available for comment.

On Wednesday, the prisons bureau confirmed Madoff had been moved to the prison's medical facility for undisclosed reasons last week.

Madoff is serving a 150-year sentence at Butner Federal Correctional Complex in North Carolina after pleading guilty to a $65 billion investment fraud that bilked thousands of investors worldwide.