Italian car maker Fiat on Wednesday signed a deal with the government of Serbia to take over the Zastava car plant after paying an initial 100 million euros (143 million dollars). 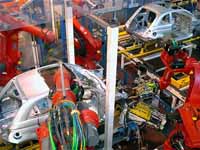 Fiat will own 67 % of the company and the government of Serbia 33 % in the central Serbian town Kragujevac, set to produce 200,000 cars yearly.

The Italian company is expected to pay another 100 million euros in 2010.

The deal was signed by Fiat Group Vice-President Alfredo Altavilla, the head of the project in Serbia, Giovanni De Filippis, and Serbian Economy Minister Mladjan Dinkic.

The deal is part of a 700-million-euro joint venture agreement that Fiat and the Serbian government signed last year.

Implementing the accord slowed during the global economic crisis but is now expected to move ahead with the production of two new Fiat models to be launched in 2011 for export to European and US markets, Dinkic said.