Spyker Cars Keep On Negotiating with GM for Saab 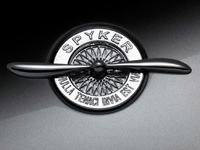 Spyker Cars Keep On Negotiating with GM for Saab

“An 11-point proposal had been submitted to GM, addressing each of the issues that arose during the due diligence process” which will “remove each of the obstacles that were standing in the way of a swift transaction,” Spyker Chief Executive Officer Victor R. Muller said in a statement.

GM last week said it will shut the money-losing Saab unit after talks collapsed on a sale to Spyker, the second failure in less than a month to keep the 72-year-old Swedish brand alive.

GM and Spyker decided there was “no point in carrying on” after encountering issues that couldn’t be resolved, GM Vice President John Smith said on a conference call on Dec. 18.

“We have made every effort to resolve the issues that were preventing the conclusion of this matter and we have asked GM and all other involved parties to seriously consider this offer,” Muller said in today’s statement.

“We are very confident that our renewed offer will remove the impasse that was standing in the way of an agreement on Friday, and this would still allow us to conclude the deal prior to the expiry of the deadline originally set by GM of Dec. 31,” he said.