General Mills Inc., the maker of Cheerios cereal and Progresso soup, reported a 49% rise in fiscal second-quarter earnings as the ackaged-foodmaker continues to benefit from lower commodity costs and higher prices, while getting a boost from its hedging strategy. 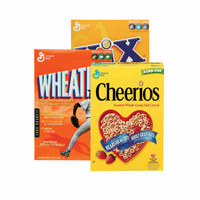 The results exceeded analysts' expectations and the company raised its earnings outlook for the fiscal year by 12 cents, to $4.52 to $4.57 a share.

The maker of Cheerios, Pillsbury and other brands during the quarter jettisoned some underperforming retail products that generated net sales of about $35 million in its last fiscal year. Its earnings have been boosted in recent quarters by moderating commodity prices and strong sales of household staples such as Hamburger Helper, Multigrain Cheerios and Pillsbury cookie dough, allowing the company to recently boost its dividend a second time this fiscal year.

In an interview, Chief Executive Ken Powell said the company might use "modest" price promotions in a few categories to drive growth. He didn't specify the products and categories where the company will boost promotions, The Wall Street Journal reports.

It was also reported, General Mills, like most food companies, has benefited from cost-cutting and easing commodities costs, while its sales have been boosted as consumers eat more meals at home to save money.

The maker of Progresso soup and Yoplait yogurt said profit rose to $565.5 million in the fiscal second quarter ended November 29, from $378.2 million a year earlier.

Excluding a gain from commodity hedges, earnings were $1.54 a share. Analysts on average forecast $1.45, according to Thomson Reuters I/B/E/S.

Sales rose 1.7 percent to $4.08 billion as a 4 percent increase in the U.S. retail segment, the company's largest business, helped offset a 16 percent decline in the bakeries and food service unit, Reuters reports.

Bloomberg quoted Edward Aaron, a Denver-based analyst with RBC Capital Markets, as saying, “I don’t think investors could have asked for a much better quarter.” In a telephone interview today hAaron said he rates the shares “outperform,” Bloomberg reports.