Bernanke Is a Big Ben

Federal Reserve Chairman Ben Bernanke was named Person of the Year by Time magazine on Wednesday, giving him a high-profile boost as he tries to fend off proposals that might weaken the Fed's independence. 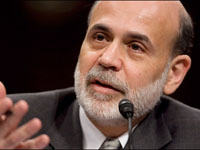 Bernanke Is a Big Ben

The selection puts the mild-mannered Bernanke, a former professor, in the company of U.S. President Barack Obama, Pope John Paul II and Russian President Vladimir Putin, among other prominent world figures the magazine has picked in past years.

The Senate is considering his nomination to a second term to head the Fed -- the U.S. central bank, and while he is expected to win confirmation, criticism of the Fed among the public and members of Congress is at its highest in decades.

"Ben is the person that kept us from going over the edge of the precipice and into the abyss," said former Fed Governor Lyle Gramley, now a senior economic adviser at Soleil Securities. He said the Person of the Year selection could help Bernanke politically.

Time credited the 56-year-old Bernanke with creative leadership that helped set the U.S. economy on a path to recovery even as he and other policymakers remain concerned about the high unemployment rate of 10 %.

Double-digit unemployment is one reason the Fed, which cut benchmark interest rates to near zero a year ago, is likely to repeat a vow to keep them exceptionally low for "an extended period" when it wraps up a two-day meeting on Wednesday.

"Bernanke ... knows the economy would be much, much worse if the Fed had not taken such extreme measures to stop the panic," Time said in its cover story on Bernanke, which noted he had greatly expanded the Fed's power through his efforts to fight the financial crisis.

Time's Person of the Year selection, widely watched in U.S. media, is not meant to be celebratory but rather to focus on a world figure who has been highly influential in the past year.

Still, the distinction is one that analysts said would probably help Bernanke, an expert on the Great Depression who succeeded Alan Greenspan in 2006.

For the first several years of his tenure, Bernanke, known for his low-key, analytical manner, had a much lower profile than Greenspan, who was considered a rock star on Wall Street and was extremely popular with the public during his tenure.