Hundreds of thousands of British Airways passengers face travel  problem over the busy Christmas and New Year period after cabin crew voted Monday to strike over pay and job cuts. 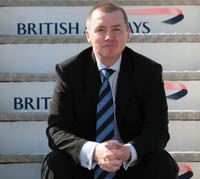 The industrial action comes at a critical point for loss-making British Airways, which is slashing costs and attempting to merge with Spanish carrier Iberia in a fight to stay competitive against its rivals.

"After long discussions... we are planning to withdraw our labour for a period of 12 days starting 22nd December," Britain's biggest trade union Unite said in a statement after staff voted 9-1 in favour of striking.

The announcement is a major blow for BA passengers that are planning to fly worldwide with the British airline over the festive period to visit friends and relatives. BA had carried 2.34 million passengers in November.

The union complained that BA management were in a hurry to cut short-term costs and were ignoring the longer-term impact on BA customers.

"British Airways is extremely disappointed that Unite is planning massive disruption for hundreds of thousands of our customers over the Christmas/New Year holiday period," it said in a statement.

"A 12-day strike would be completely unjustified and a huge over-reaction to the modest changes we have announced for cabin crew which are intended to help us recover from record financial losses.

"Unite's cynical decision betrays a total lack of concern for our customers, our business and other employees within British Airways."

BA last month revealed that net losses quadrupled to 217 million pounds in the group's first half, or six months to September.

Ahead of Monday's vote result, BA chief executive Willie Walsh had admitted that he was bracing himself for "bad news".

BA also revealed Monday that its pension deficit had ballooned to 3.7 billion pounds (4.1 billion euros, 6.0 billion dollars), a 76-% increase compared to the level in 2006, causing the airline to seek a "recovery plan."

The huge shortfall risks scuppering BA's proposed tie-up with Iberia, which has the right to walk away should BA fail to resolve the problem.

The merger was seen by analysts as a move to avoid being sidelined by rivals Air France-KLM and Lufthansa, as the economic downturn and the rise of low-cost airlines drives airline alliances and steep cost cutting.

A combination of BA and Iberia would create one of the world's biggest airlines, as the two groups grapple with huge losses amid falling demand for air travel, according to the AFP' report.