Stock futures are indicating a higher opening on Wall Street Monday after Abu Dhabi provided a surprise $10 billion bailout to Dubai to help with debt repayments. 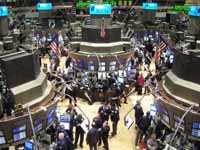 The move, which also sent world stocks mostly higher, helps ease investor fears that the emirate will default on its debt and signal a new round of broader credit problems. Dubai World was up against a Monday deadline to repay the loans.

In the U.S., meanwhile, Citigroup Inc. said it will pay back $20 billion in bailout money it received as part of the government's Troubled Asset Relief Program.

In other corporate news, Exxon Mobil said it will acquire XTO Energy in an all-stock transaction valued at $31 billion. The deal is part of Exxon's move to acquire valuable natural gas fields.

Encouraging news about how consumers feel about the economy and their spending habits sent stocks higher on Friday. Strong retail-sales data from the government helped boost investor confidence.

Financial stocks are likely to be under pressure Monday despite the move by Citigroup, as President Obama meets with top executives of some of the nation's biggest lenders.

Obama is asking bank executives to support his efforts to tighten the financial industry, but the meeting was shaping up to be a tense encounter after Obama's description of bankers as "fat cats" in a "60 Minutes" interview broadcast Sunday.

Meanwhile, bond prices were mixed. The yield on the benchmark 10-year Treasury note, which moves opposite its price, was unchanged from 3.55 % late Friday. The yield on the three-month T-bill, considered one of the safest investments, rose to 0.03 % from 0.01 percent.

The dollar mostly fell against other major currencies, while gold prices rose.