Citigroup to Repay $20 Billion to Taxpayers

Citigroup Inc. will repay $20 billion to taxpayers and escape government-imposed pay restrictions. Citigroup is a recipient of the biggest U.S. bank bailout. 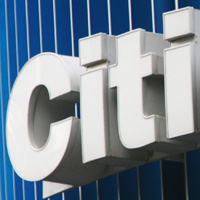 Citigroup to Repay Billion to Taxpayers

Citigroup, the only major U.S. lender still dependent on what the government calls "exceptional financial assistance," will raise the funds with a sale of $20.5 billion of equity and debt. The New York-based company also plans to substitute “substantial common stock” for cash compensation, the bank said in a statement today.

Chief Executive Officer Vikram Pandit has pressed for an exit from the Troubled Asset Relief Program out of concern that TARP pay constraints make Citigroup vulnerable to employee poaching by Wall Street rivals. Bank of America Corp. exited the program last week after paying back $45 billion of rescue funds.

"It's great news," Gary Townsend, chief executive officer of Hill-Townsend Capital LLC, an investment firm in Chevy Chase, Maryland, said in a Bloomberg Television interview. “It’s important for Citi to exit these extraordinary agreements with the U.S. Treasury and the government as quickly as possible. It’s expensive perhaps, but I think it had to be done," Bloomberg reports.

News agencies also report, e xecutives of Citigroup, Goldman Sachs (GS.N), JPMorgan Chase & Co (JPM.N) and other top-tier banks are to meet President Barack Obama later on Monday. Obama is expected to call on the bankers to take responsibility for helping the economy after benefiting from taxpayer-funded bailouts of the financial sector

As part of the deal with Citigroup, the U.S. Treasury will sell up to $5 billion of Citigroup stock it holds alongside the bank's $17 billion offering. The bank's offering may swell to $19.55 billion if investor demand is high enough.

Bank of America Corp (BAC.N), which sold $18.3 billion of shares earlier this month to exit TARP, found extremely strong demand for its offering. Investors that bought shares told Reuters they received about half the shares they ordered in that deal, signaling the bank could have sold twice as many shares as it did.

Citigroup's capital raising this week also includes the sale of $3.5 billion of tangible equity units, which have characteristics of debt and equity.

In January, Citigroup will issue $1.7 billion of common stock equivalents to employees in place of cash they would have otherwise received , Reuters reports .

Chief Executive Vikram Pandit said, "We owe the American taxpayers and the government a debt of gratitude for their extraordinary assistance," Pandit said in a note to employees.

Citi said that by Dec. 31, it will have paid or accrued $3.1 billion in dividends and interest to the government on TARP investment.

Early this year, Citigroup faced talk of nationalization, and its share price swooned to 97 cents in March from a record $55 in 2006. The unraveling of Citi's shares began as the bank suffered writedowns of more than $30 billion two years ago from risky mortgage bets, forcing the ouster of CEO Chuck Prince.

Citigroup also has remodeled itself to help fortify itself against losses. In January, the bank reorganized itself into two separate units - placing retail and investment banking into a revived Citicorp name, and its brokerage and asset management operations into Citi Holdings, The Wall Street Journal reports.