Volkswagen AG started production of its first compact car in India on Saturday, hoping to capture up to 10 percent of the country's fast-growing automobile market within the next six years, the company said. 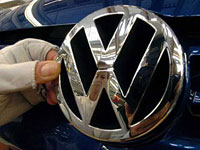 The Polo, a compact hatchback, rolled off the lines at Volkswagen's factory in Pune, an auto hub a few hours outside Mumbai , shortly before noon. The factory, opened earlier this year, is part of a 580 million euros ($846.8 million) investment, which the company says is a "key element" in its India strategy.

The factory can produce up to 110,000 cars a year, and will be used to manufacture the Skoda Fabia, Polo and a sedan to be launched in the second half of next year, the company said, The Associated Press reports.

According to Bloomberg, the Wolfsburg, Germany-based company will sell cars under three brands, including Skoda AS and Audi AG, to achieve its targets, it said in a statement in Chakan, near Pune, in western India. Production of its Polo compact car began today at the plant, which opened earlier this year. Volkswagen will start selling the cars in March, challenging partner Suzuki Motor Corp., the maker of half of all cars sold in India.

"The Pune plant is a key element in Volkswagen’s strategy for India," said Jochem Heizman, a member of the company’s management board. India’s car market holds "enormous potential" for the German carmaker, he said.

"We know that we need a car below the level of the Polo," said Jochem Heizmann, a member of the board of Volkswagen. "We are working towards this but no decision has been made yet."

Volkswagen and Suzuki Motor plan to develop a new small car that would cost between $4,300 and $5,400 for the Indian market, following their recent tie-up, the Economic Times reported this week.

Volkswagen will buy a one-fifth stake in Suzuki Motor for $2.5 billion, tapping the Japanese firm's expertise in small cars and dominance in India as VW seeks to become the No.1 automaker, the companies said earlier in the week, Reuters informs.