Friday Apple said it filed a countersuit against Nokia. The Finnish phone maker is charged with infringing on 13 of its patents. 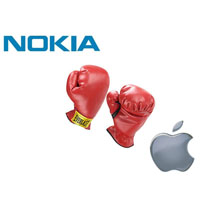 "Other companies must compete with us by inventing their own technologies, not just by stealing ours," said Apple general counsel Bruce Sewell, in a statement.

"Nokia needs access to Apple's intellectual property because Nokia has copied and is now using that patented technology," Apple said in its filing. "Nokia chose to copy the iPhone, especially its enormously popular and patented design and user interface," Apple alleged.

Apple named the Nokia E71 as one of the products that allegedly infringe its patents, as well as all Nokia devices that have a built-in camera and those that use the S60 or Symbian platforms. The E71 is a high-end Nokia smartphone that currently has a street value of about $250, InformationWeek reports.

Nokia filed its suit against Apple in October, asserting that the iPhone has infringed on 10 different Nokia patents since it was released in 2007. Nokia claims that 40 other technology companies are paying licensing fees to Nokia for these same patents, which cover a range of technologies including wireless data, and security and encryption, among other things.

Apple has not disclosed which patents Nokia is allegedly infringed. The entire battle, though, highlights once again the issue of technology patents. Vague patents that apply broadly to widely-used technologies like GSM, CDMA, or LTE wireless networking protocols could arguably be used for patent-trolling suits against any wireless technology company.

The technology we use today is the result of a continual evolution of concepts and tools. Each generation builds on the one before it in a Darwinian fashion--technologies that work are incorporated and adapted, technologies that don't work become extinct.

Of course, companies that invest billions, or tens of billions of dollars, on research and development and arrive at groundbreaking new solutions deserve to be compensated for those efforts. The challenge is to ensure that the patents are written in a way that clearly defines what is being patented and not in a way that can be interpreted to broadly apply to entire industries, PC World reports.

Meanwhile, Nokia said that the countersuit does not change anything fundamental in the original case, but noted that it would take time to study the suit.

"They have infringed our patents since the iPhone launch in 2007," a Nokia spokesman said.

While the battle may go on for some time, analysts see the companies eventually coming to a licensing agreement.

"We can now look forward to a lengthy tit-for-tat exchange between Apple and Nokia as they grind out a deal," said Ben Wood, research director at CCS Insight.