Businessmen from the world's largest energy firms gathered amid tight security at Iraq's Oil Ministry on Friday to compete for deals to develop some of the country's most prized oilfields. 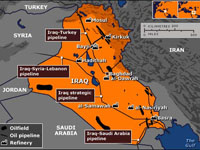 Iraq will offer three of the world's largest fields on the first day of its two-day auction, a rare opportunity for oil firms, from Western majors to Chinese and Indian state-owned giants, to gain access to cheap Middle East oil reserves.

The deals have the potential to boost Iraq's capacity by millions of barrels per day and make it a rival to top oil producers Saudi Arabia and Russia.

Baghdad desperately needs the billions of dollars of revenue these and other deals would generate to rebuild after decades of war, international sanctions and years of neglect and sabotage.

Competition was expected to be fierce as the second auction since the 2003 U.S. invasion includes the last of Iraq's supergiant fields - reservoirs holding 5 billion barrels or more. They are among the last untapped fields of their size in the world.

The auction is one of the largest ever held, with about as much oil on offer in this bid round alone as all that held by OPEC-member Libya.

Iraqi army helicopters buzzed overhead while convoys of armoured SUVs carrying the oil executives hidden behind tinted windows raced through town. Iraqi police trucks and squads of police dressed in commando gear deployed at dawn to line the streets leading to the Oil Ministry, blocking off many side roads.

Crowds of uniformed police and army personnel milled around at the ministry next to Iraq army Humvees and police pickup trucks.

The giant fields on offer on the first day of the auction were southern fields Majnoon and Halfaya and central field East Baghdad, part of which lies under Baghdad's Sadr City slum.

Also on the block were a cluster known as the Eastern Fields in volatile Diyala province, and Qayara, a reservoir in the northern province of Nineveh, where Sunni Islamist insurgents like al Qaeda are still on the prowl and Kurd-Arab disputes have led to considerable tension, according to Reuters' report.