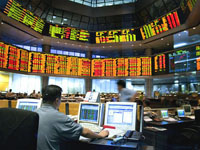 Major markets jumped by 2 % or more after tumbling on Friday amid fears Dubai's debt problems could lead to more financial instability and were a sign of hidden troubles elsewhere in the still weak global economy.

The UAE's central bank helped soothe investor fears, at least for now, by pledging Sunday to make extra funding available to all banks in the country, including foreign institutions with local branches.

However, the bank's announcement, aimed at shoring up confidence and averting a bank run, did not mention any specific help for Dubai. The troubled emirate, which splurged on flashy developments and other investments during the credit boom, said last week it now needed at least a six-month reprieve from paying its roughly $60 billion debt.

Uncertainty surrounding Dubai's fate sent Wall Street lower, though the losses were less than other markets.

Oil prices rebounded to near $77 a barrel in Asia as panic about the global fallout from Dubai's debt problems abated.

Benchmark crude for January delivery rose 42 cents to $76.47 in electronic trading on the New York Mercantile Exchange. The contract fell $1.91 to settle at $76.05 on Friday.