Smoking Bans in U.S. Bars May Ruin Lots of Them

It seemed the owners of U.S. coffee-houses and restaurants got used to smoking bans, but it turns out that the healthy lifestyle promotion seriously endangers restaurant business. 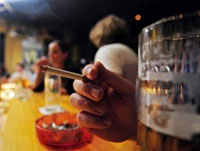 Smoking Bans in U.S. Bars May Ruin Lots of Them

The District was first to clear the ashtrays from its taverns in 2007. Maryland pushed its smokers outside not long after, in 2008. And on Tuesday, so goes Virginia.

The march of smoking bans in bars and restaurants across the region has made lighting up while dining out a practical impossibility for many people. And Virginia's ban -- which comes into effect on Tuesday -- leaves the Washington area with a only a handful of venues where a customer can hold a drink in one hand and a cigarette in another.

Shelly's Back Room in Northwest, a cigar bar exempted from D.C.'s ban, is one of them. Exactly what effect the new law will have on Shelly's and other exempted establishments is not clear. If there's any spike in customers coming across the Potomac after Tuesday, owner Bob Materazzi expected it to be short-lived.

Materazzi said he is opposed to the bans being imposed by the governments, which puts him in the company of many business owners, as well as restaurant and tobacco industry groups who say the decision should be left up to owners. On the other side, anti-smoking advocates and medical professionals point to shifting attitudes about the dangers of secondhand smoke and argue that the time is right to abolish cigarette smoking in public places.

Edelman pointed to a range of studies that showed smoking bans causing a dramatic reduction in heart attacks.

Each government has carved out its own restrictions for the bans. Virginia will allow smoking in private clubs and lodges, in patio areas and in separately ventilated smoking rooms. D.C. exempts cigars and hookah bars that rely on revenue from tobacco sales. Maryland allows smoking in tobacco shops and allows businesses to apply for hardship waivers.

In Northern Virginia, the shift may be less than jarring, because most establishments already have gone smoke-free. Health officials have concentrated their outreach efforts in more rural parts of the state.

The choice should be left to the restaurants, argues Bill Phelps, a spokesman for Altria, the Richmond parent company of tobacco giant Philip Morris.

"Every restaurant in Virginia has the right to restrict smoking on its own without a government mandate," he said. "And many have already done that."

The Washington Examiner has contributed to the report.