The budget carrier said Harrison "has indicated his desire to leave the company in order to seek new challenges," but didn't indicate what he planned to do next. 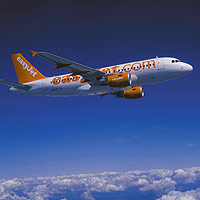 He will remain in his current role until June 30, 2010, but his contract has been amended to ensure a smooth transition until a new chief executive can be found.

At the same time, easyJet said Michael Rake will take over from David Michels as chairman from Jan. 1, 2010. Rake has been deputy chairman and senior independent director since June , The Wall Street Journal reports .

It was also reported, e asyJet has been one of the few airlines to make a profit in the last year, although it has not been without its problems in the boardroom.

It recently resolved a long-running spat with the airline's founder and biggest shareholder Sir Stelios Haji-Ioannou over growth plans, announcing the board had reached agreement on a "prudent" fleet expansion programme.

The flamboyant easyGroup empire millionaire wanted the board to consider maintaining dividend payouts by scaling back growth plans to match market conditions.

Interim chairman Sir David Michels, who is remaining with the company as senior independent director, paid tribute to Mr Harrison.

He said: "EasyJet has been the best performing European airline through the recession and we thank Andy for his considerable contribution during this period and his leadership of the company over the last four years , " The Press Association reports.

Reuters quoted Arbuthnot analyst Gerald Khoo as saying, "We remain positive on easyJet's long-term fundamentals, with opportunities to gain market share profitably during the recession. However, we accept that a company with no permanent CFO and in search of a new CEO may well struggle to outperform in the short term."

Shares in easyJet (EZJ.L) fall 2.7 percent after Andy Harrison says he will quit as chief executive of the low-cost carrier at the end of June, Reuters reports.