Official data have shown that Japan's economy increased by much less than first estimated in the July to September period. 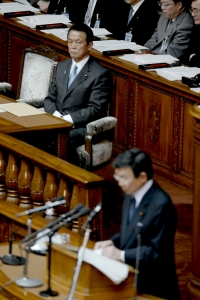 The economy only grew at an annualised rate of 1.3% during the third quarter, down from the previous estimate of 4.8%, said the Cabinet Office.

The main reason for the change was a sharp downward revision in the amount companies had invested in new assets.

The figures come a day after the government agreed a new stimulus deal, BBC News reports.

Meanwhile, Japan's Chief Cabinet Secretary Hirofumi Hirano said on Wednesday that the government may have to issue more than 44 trillion yen (500 billion U.S. dollars) in government bonds if it is to fulfill campaign pledges set out in its manifesto this summer.

"The drop in tax revenues has made it difficult for the government to realize the action plan it promised in its manifesto," Hirano said. "I assume the Prime Minister (Yukio Hatoyama) thinks it is important to maintain fiscal discipline, but also wonders if he should say no if new bonds will affect people's lives."

In a campaign this summer, the Democratic Party of Japan (DPJ) pledged to change Japanese politics, to move the focus of spending away from major public works projects and into the hands of families and households.

Keeping to those pledges has proved difficult as the economy has made only a tentative recovery, and businesses have refrained from investing large amounts of money while the yen has risen to 14 year highs against the dollar. This has led to a drop in tax revenues, which has given the government less money to spend in its next budget, Xinhua reports.

It was also reported, that economists warned that the stimulus measures might not have much effect, as there was insufficient new spending, and the pace of economic recovery would be very slow unless further steps were taken.

"I expect the B.O.J. and the Democratic Party government to do something that will have an immediate effect to keep the Japanese economy afloat," said Yoshikiyo Shimane, chief economist at Dai-Ichi Life Research Institute, referring to the Bank of Japan.

"It has been said the Japanese economy bottomed out this past spring, but the July-September figures confirmed that the recovery is very weak," The New York Times reports.