UK Pre-budget Report to Be Focused on "Growth, Jobs and Fairness " 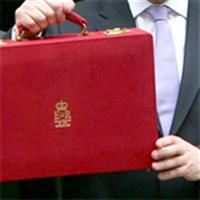 UK Pre-budget Report to Be Focused on "Growth, Jobs and Fairness "

Against a broadly weaker dollar, sterling recovered from an earlier near two-month low below $1.62, but it remained weak and analysts and traders believe it could resume losses if Darling does not present a credible plan to cut the UK's budget deficit.

Darling begins his pre-budget report presentation at 1230 GMT. He is expected to raise his forecast for government borrowing from a record 175 billion pounds this year as he admits the recession has turned out to be deeper than forecast in April, Reuters reports.

In themeantime, " g rowth, jobs and fairness" will be the key elements of today's Pre-Budget Report, Chancellor Alistair Darling told a special meeting of Cabinet today.

Mr Darling briefed senior colleagues at 10 Downing Street just hours ahead of the last PBR before the general election, in which he is widely expected to announce a one-off "supertax" on bankers' bonuses.

Gordon Brown told the meeting that the important issues for the PBR were "rebuilding the economy, cutting the deficit and protecting the front line", the Prime Minister's spokesman told reporters.

Speaking on GMTV, Lord Mandelson said Mr Darling’s would need to “keep us firmly on the road to recovery" from the recession.

"He has got to make clear we are going to prioritise and protect our front line public services, like schools and hospitals and police, but he has also got to set out how, in coming years, public spending will be squeezed, because we have got to bring down borrowing, we have got to narrow the deficit," he said, Telegraph.co.uk reports.

It was also reported, the Treasury will concede that the economy will shrink by 4.75 per cent this year - more than a percentage point worse than forecast in the March 2009 Budget, even though recently published data suggest things will not be quite so bad.

Alistair Darling will predict anaemic growth of between 1 per cent and 1.5 per cent in 2010, the same as in the 2009 Budget. This is now in line with independent forecasts.

The chancellor will continue to expect growth of about 3.5 per cent a year in 2011 and beyond until the economy's spare capacity is eliminated. He is likely to push this date further into the future to 2015-16.

The Treasury is likely to continue to say that 5 per cent of potential output was destroyed for good by the recession, Financial Times reports.