OPEC is Satisfied with Oil Price

The Organization of the Petroleum Exporting Countries, which pumps more than a third of the world's oil, meets in Angola on December 22. Several members, such as Algeria, Kuwait and Qatar, have indicated OPEC may hold output steady. 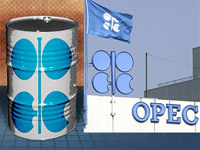 OPEC is Satisfied with Oil Price

"We are seeing signs of an economic recovery, largely driven by developing countries such as China and India, yet we still need to remain cautious and take things slowly," OPEC's Abdullah al-Badri told reporters in an email response to questions.

"There is no doubt that the oil market remains complex and difficult to gauge. We continue to see price volatility, which makes it difficult to judge what is really happening. Oil supplies are abundant."

Oil prices reached $82 a barrel in October, the highest in a year, in a rally many see as driven by expectation of economic recovery and a weak dollar rather than a tighter oil supply and demand balance.

Badri said oil inventories remain above their five-year average and there were 165 million barrels of crude and products floating at sea -- equal to almost two days' global demand and more than some estimates.

He did not answer directly the question of what OPEC would decide in Angola, saying it was "somewhat difficult" and the group's oil ministers would make the final decision.