Dubai World, the indebted conglomerate at the heart of this sheikdom's credit problems, may sell off assets it acquired during a multiyear building and buying spree to raise cash, according to a senior government official. 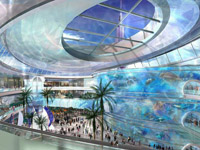 Dubai Finance Department Director-General Abdul Rahman al-Saleh did not say which pieces of the company are for sale in an interview posted on al-Jazeera's Web site Monday. However, he emphasized that the assets in question would be the company's, and not those held by the government of Dubai.

The finance chief said the primary aim of restructuring the state-backed company is to ensure it remains viable for years to come.

"It is premature to announce any plans now, but the main goal is that Dubai World will continue in the future as a company with a new framework to face challenges," al-Saleh said. He did not elaborate.

The sale of any major Dubai World assets would mark a shift for the conglomerate, which repeatedly downplayed questions it would need to unload pieces of its global empire even as Dubai's financial concerns grew more acute over the past year.

That perception began to shift last week, when the company said tersely that its restructuring would include an assesment of options to reduce its debt load, "including asset sales."

Al-Saleh's latest comments are the clearest sign so far that Dubai's leadership is growing more comfortable with the idea of selling off pieces of the company.

Over the past years, Dubai World relied heavily on borrowed money to carve out markets far beyond the tiny emirate's shores. Its slogan boasts: "The sun never sets on Dubai World."

At home in Dubai, the company's property arm Nakheel built man-made islands in the shape of palm trees and a map of the world. The iconic British cruise liner Queen Elizabeth 2 sits in a downtown Dubai port awaiting renovations to turn it into a floating hotel.

Many lenders at home and abroad lent Dubai World money on the assumption that, as a company controlled by the government, it had implicit state backing.

Al-Saleh, however, reiterated the Dubai government's position that there is no state guarantee in Dubai World.

The company has some $60 billion of outstanding debts. Late last month, it surprised markets by requesting a delay in paying billions of dollars of debt coming due this month.

Al-Saleh said Dubai World's problems stemmed from a reliance on previously easy-to-get, short-term loans that were used to finance long-term projects like luxury high rises and even more manmade islands.

"Most of Dubai World loans range from three to five years, whereas the projects that were financed range from 25 to 30 years," he said. "The difference between the finance terms and carrying out the projects led to this crisis."