Apple Inc., the biggest Internet-music seller in the U.S., acquired Lala, adding a Web-music service to its iTunes song-downloading business. 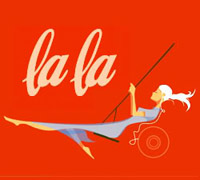 Apple confirmed the acquisition of closely held Lala today, without disclosing terms. "Apple buys smaller technology companies from time to time and we generally do not comment on our purpose or plans," said Steve Dowling, a spokesman for Apple.

The acquisition gives Apple another way to sell music. Unlike iTunes, the Lala service lets users listen to entire songs once for free. Customers can then opt to buy the track for 10 cents and listen to it on the Web.

The service differs from iTunes because the music is stored on Internet servers, via the so-called cloud, instead of getting downloaded to a computer. "There's a big question in the industry about what will be the dominant way people will obtain music, whether it's stored in the cloud or whether it will be on a hard drive," said Larry Kenswil, an attorney at Loeb & Loeb in Los Angeles, who's the former head of Universal Music Group's digital unit. "Apple is wise to cover its bases because it's only in the download business."

Lala, based in Palo Alto, California, offers access to more than 8 million songs, including tracks from EMI Music, Warner Music, Sony BMG Music Entertainment and Universal Music Group. If customers decide to download a track, the cost is 79 cents—compared with 69 cents to $1.29 on iTunes.

Lala is partners with Google Inc., which uses it to let customers buy music. Google's service, called One Box for music, also relies on a site called ILike, which is owned by News Corp.'s MySpace. Apple offers more than 11 million songs through the iTunes store, which it opened in April 2003. ITunes now operates in 23 countries. The Cupertino, California-based company says it is the world's largest music retailer, with 8.5 billion songs sold.

The acquisition may signal that Apple is interested in creating a subscription service, Kenswil said. "Maybe they are ready to do that," he said. "The Lala model is somewhere between the two," Kenswil said, since it offers an online service and also lets users keep songs permanently on their hard drives.

Lala was started by Seven Networks Inc. founder Bill Nguyen to let people trade compact discs via the mail. Lala Chief Executive Officer Geoff Ralston was vice president of engineering at Yahoo! Inc. The current version of Lala debuted last year. Apple fell $3.16, or 1.6 percent, to $193.32 at 4 p.m. New York time in Nasdaq Stock Market trading. The shares have more than doubled this year.
The Business Week has contributed to the report.